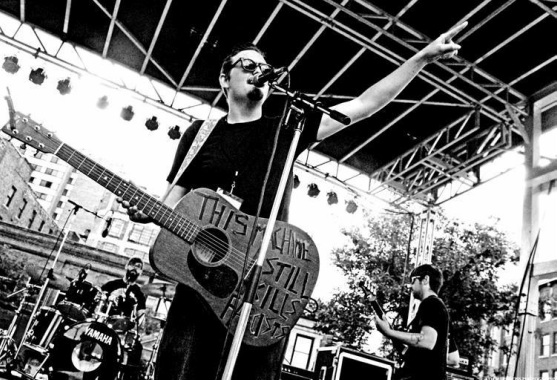 Pat Dougherty began writing songs in a borrowed storage closet. Tinkering with only a used drum set and an old organ he would periodically emerge to share the works in progress with a handful of close friends that would later become Fairfax, AK.  After spending the summer performing around the Midwest, the group retreated to the attic of a worn yellow house in Frogtown and began crafting their upcoming debut album, Love Stories and Picture Shows.

“That might have been the loudest folk act I have ever heard.” – Steve Mcclellan of First Avenue.

Fairfax, AK is an acoustic battlefield. The group refuses to use setlists, and will often improvise songs, lyrics, and dynamics. Any audience member should come ready to yell, stomp, and clap along as these punk rock troubadours bring relentless energy to their unique brand of folk music. -MidWest Music Fest Review

Fairfax, AK’s way of illustrating the hard work in not just crafting intricate and personal music but that the labor of love carries over into all aspects of their music and how you get to see and hear it. The song, “Just Fine” starts and moves on with a plodding rhythm and melody that eventually erupts into an enveloping Arcade Fire-like sing-along, one of the more heartwarming ingredients in the band’s songs on their new disc.” – Danny Sigelman CITY PAGES

“Love Stories and Picture Shows is a sweet, cohesive collection of tunes that owe as much to the singer-songwriters of the mid-90s as the folky 60s and punk 70s. It’s a record that slips in an surprises you, like a polished up, lyrically focused take on Spirits of the Red City, or a Hootenanny with an orchestral band.” – Carl Swanson CAKE IN 1

“This Minneapolis group has made an album with great songwriting and great use of dynamics, especially on ‘Invisible Monsters.'” -Dan Heier Star Tribune